The 4-2-3-1 is taking over the 4-4-2 in the most common formation in football with it being used by the champions of the Barclay’s Premiership, Liga BBVA, Ligue 1, the Bundesliga and the top international teams. Consisting of 4 defenders, 2 defensive midfielders, 3 attacking midfielders (or 1 attacking midfielder and two wingers) and 1 striker, the formation can get many men into the midfield to keep possession whilst still having a threat from out wide, can be used with a counter attacking style of play (as seen in Montpellier) or with a possession based style of play (as seen in Spain (world cup 2010)). In terms of creating chances, the central attacking midfielder is the main playmaker in the team and if you can stop him, you will have a greater chance in defeating your opponents. So, how do we stop him? Lionel Messi is the best player in the world. Notching up 73 goals and 29 assists in club competitions in the 2011-2012 season. He plays the position of false 9, aiming to drop deep from the position of striker into space. Mourinho tried to stop him by positioning Pepe, their centre back, in front of the defence to man mark him. The problem with this however is that you end up losing a man in midfield because one of them is constantly marking the playmaker, so you will generally have less possession and no creativity from deep (which could be used to start counter attacks). On the other hand, Les Cules’ rivals Barcelona have used midfielders turning into defenders, with Busquets dropping deep into the defence from holding midfield when in possession, this gives them creativity from not only attack (Messi) and midfield (Xavi/Iniesta) but from the back as well. See where I’m going with this?

So maybe the counter to the 4-2-3-1 is to play a defender in midfield, to stop the playmaker creating chances, and a midfielder in defence, to keep the creativity and start counter attacks with long balls from deep. 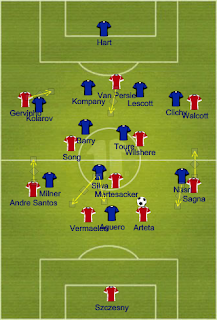 The ideal formation for this to be implemented into is the 4-3-3/4-1-4-1 as seen above (the yellow boxes show man marking). As you can see Mertesacker has been pushed into midfield to mark Silva, and Arteta has gone into defence, Mertesacker and Vermaelen both are man marking whereas Arteta isn’t. This means that in an ideal situation, when Arsenal retain possession, the Spaniard will be free to receive a pass and then start a counter attack. The forward arrows on the Arsenal full backs show that as soon as their teammates get hold of the ball, they will make runs from deep, creating a counter attack and making themselves available for Arteta.

You’re probably thinking, ‘but what if the full backs are caught out of position?’. Well, that is covered too, because Arteta is zonal marking, he can cover either full back if they are caught too far up field.

As far as i know, this strategy is the closest thing to countering the 4-2-3-1 and false 9s in general, The midfielder in defence makes up for the disadvantages of the defender in the midfield and vice versa. Let me know what your thoughts are!

This article was published on http://tacticalterrier.blogspot.co.uk/

Sami FaizullahAugust 19, 2012
Previous Next
Close
Test Caption
Test Description goes like this
We use cookies to ensure that we give you the best experience on our website. If you continue to use this site we will assume that you are happy with it.Ok